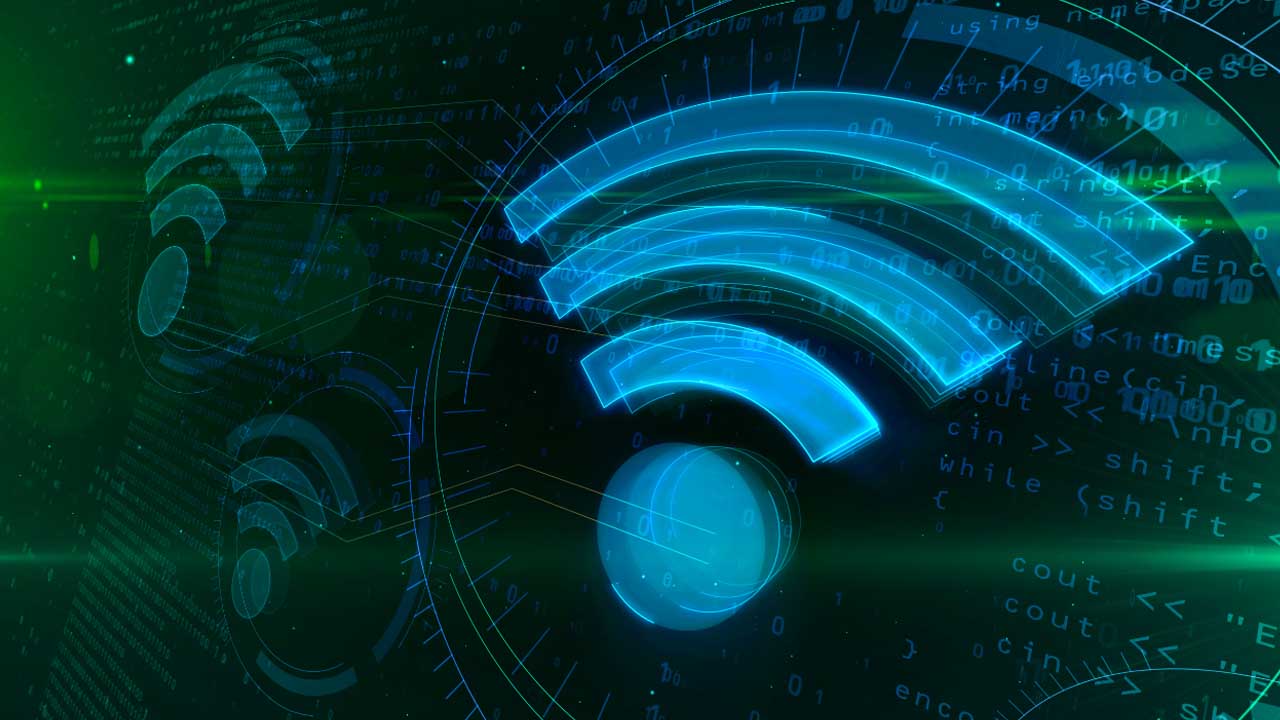 You have probably heard or read on more than one occasion that the best 2.4GHz WiFi channel configurations are 1, 6, and 11 because they are channels that “do not overlap”, but… Is this the case, and will it improve your network if you use these channels?

In this article, we will discuss why this configuration is recommended in 2.4GHz networks and why it sometimes doesn’t work.

The problems affecting WiFi signal quality are large because the 2.4GHz radio spectrum is free to transmit. This means that no authorization is required to be able to broadcast on it, unlike mobile telephony, for which you have to pay licenses worth millions of dollars.

For this reason, many devices use it, generating more and more wireless interference with each other.

Unless there are a large number of devices connected to the network, -depending on the router or access point, but usually around a maximum of 50 devices-, there are 2 main causes for these interferences:

Although unfortunately, these causes occur almost all the time, there is a determining factor when it comes to being affected by these interferences: the signal strength. To go deeper, let’s take a look at how 2.4GHz WiFi networks work.

How does the 2.4GHz WiFi band work?

In the idealized case, we will represent a channel as a cone. We will place eleven of these, one after the other, based on the idea that the base of the cone has a width of 20MHz, while the width of the upper part is 5MHz. Each channel starts 5MHz after the beginning of the previous one, as shown in the following image. 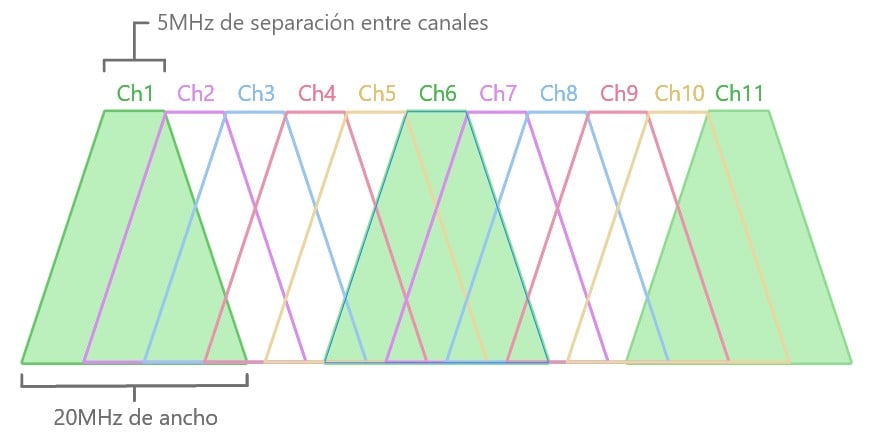 Simplified representation of WiFi channels in the 2.4GHz spectrum

As previously mentioned, due to the WiFi standard, the channel spacing is 5 MHz. This causes that when the band is placed in a particular channel, for example, 6, there are 15MHz overlapping adjacent channels (part of 4, 5, 7, and 8).

According to the WiFi 802.11b/g/n standard, channel widths of 20MHz or 40MHz can be configured in 2.4GHz WiFi networks. For simplicity, 20MHz channels have been represented, but the same situation occurs with 40MHz channels, occupying in this case twice the width.

This is the reason why it is said that the best channels are 1, 6 and 11. Having a bandwidth of 20MHz, they are channels that do not step on each other at any time. This should also be true for 1, 5, 9; for 2, 6, 10, or for 3, 7, 11. The above image is a simplified representation, a more suitable representation would be the following:

Representation of the 2.4GHz spectrum extracted from the Wikipedia article on the WiFi channel list.

Here it is shown that actually, the bandwidth of a channel is not 20MHz, but 22MHz, so there would be a small overlap if the selected channels were, for example, 1, 5, and 9.

The image also shows channels 12, 13 and farther away, channel 14. This is because the channel spectrum from 1 to 11 is valid in North America, but in the rest of the world channels 12 and 13 are also enabled. Japan goes further and enables channel 14 for some cases, so they may not be available in the configuration of all devices.

Now that we are clearer about how the 2.4GHz band works, let’s see what channel overlapping is and in what situations it occurs.

Representation of 20MHz WiFi networks overlapping on the 2.4GHz spectrum

Nowadays, we are surrounded by WiFi networks: the neighbors’ router, the bass room, the mobile tethering… This causes that there is little availability to broadcast WiFi cleanly within the 2.4GHz WiFi spectrum, so it is almost impossible to avoid stepping on another network and not sharing the transmission/airtime between all these devices.

It may also be the case that there are bands with a width of 40MHz.

The 40MHz bandwidth is nothing more than two 20MHz bands broadcasting together. In the image, you can see how one is on channel 5 and the other on channel 9. The problem with these bandwidths is that they occupy practically the entire spectrum and do not allow having more than two networks (one 20MHz and one 40MHz) without overlapping. If we add to this the saturation of networks, it is even more complex to find channels where there is no overlapping. 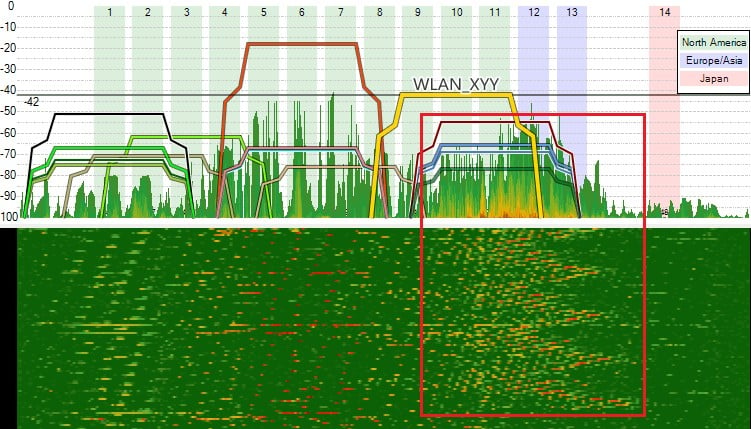 Representation of noise within the 2.4GHz RF spectrum superimposed on WiFi channels

As discussed above, the 2.4GHz range (2400-2500 MHz) is an unlicensed frequency band. It is not necessary to obtain permits or go through rigorous controls by bodies such as the Communications Authority to be able to broadcast and receive in this band. As a result, more and more devices and technologies are using this band for wireless data transmission.

The most common sources of interference are:

If you want to know more about the 2.4GHz radio spectrum, take a look at the RF Spectrum article visualizing the interference caused by baby monitor cameras, or this other article using microwave ovens as a case study. To detect these interferences it is necessary to have a spectrum analyzer, specific hardware to capture this type of signal.

How signal strength is affected

Signal strength is most commonly measured by dbm, a measure expressed in negative numbers ranging from -100dbm (weakest signal) to 0 (strongest signal).

When there is overlap or interference between channels, as long as our network has about 20dbm more than the next one, it should not affect us (at least not too much).

If you want to learn more, check out this article on how to understand signal strength.

The difference in dbm between WiFi networks

In the example above we see that the 40MHz band has a distance of 35dbm concerning the next one. With this difference, the performance of the 40MHz band is not going to be affected, as it has much higher strength.

Channels 1, 6, and 11 are the sequence of channels that best allow taking advantage of the 2.4GHz WiFi spectrum, since they allow the coexistence of three networks in the spectrum without overlapping, as long as there is no overlapping with other existing networks or other interferences. It is essential to understand that the best channel to choose will always be the least saturated.

If, however, due to saturation of the radio spectrum there are no channels available, make sure that the AP or router emits with an intensity of -20dbm to the rest of the interference. 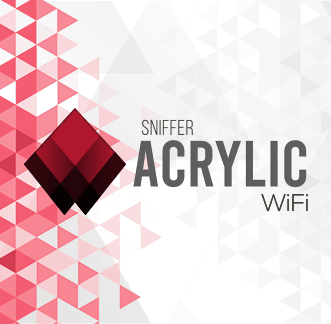