Wi-Fi networks have many different security options like WPA PSK that can be configured to improve your communications privacy. The wifi analyzer displays these security options on WEP, WPA, WPA2 and WPA3 columns.

Do you want to know how to interpret the WPA PSK WiFi security information?

We explain it below:

Acrylic Wi-Fi displays four columns for Wi-Fi network security information. The first column (WEP) indicates whether the network is open (unprotected), or uses WEP encryption (considered unsafe). WPA, WPA2 and WPA3 columns are used when your Wi-Fi network uses other encryption standards. WPA and WPA2 are very similar and can have some of the following values:

To put it simply, a WPA-PSK Wi-Fi network has a password that is shared by every single Wi-Fi network client. This is the network configuration most widely applied to ISP’s ADSL/cable/optic fiber Wi-Fi routers.

Can a Wi-Fi network be WPA2 PSK?

A Wi-Fi network can certainly be WPA2-PSK. WPA2 is the new Wi-Fi security standard, enhanced to resist some known threats. On home WPA2 Wi-Fi networks, clients can still use Pre-Shared Key (PSK) authentication.

What Is a TKIP-secured Wi-Fi network?

With the arrival of WPA as a substitute for WEP, the Temporal Key Integrity Protocol (TKIP) encryption algorithm is established as the new encryption mechanism to protect wireless communications.
Nowadays, it is considered obsolete, after being replaced by CCMP in 2009. However, TKIP still stands as one of the most widely used configurations (WPA-TKIP).

What is a Wi-Fi network with WPA CCMP or WPA2 CCMP security?

CCMP stands for Counter Mode CBC-MAC Protocol . CCMP, also known as AES CCMP, is the encryption mechanism that has replaced TKIP, and it is the security standard used with WPA2 wireless networks. According to the specifications, WPA2 networks must use CCMP by default (WPA2-CCMP), although CCMP can also be used on WPA networks for improved security (WPA-CCMP).

And what is WPA MGT or WPA2 MGT?

For WPA MGT or WPA2 MGT Wi-Fi networks, the password is not a pre-shared key. Instead, the Wi-Fi network is connected to an authentication service, usually a radius service, which verifies the user name and password of the Wi-Fi network client. Since MGT (Management) Wi-Fi networks require a more complex infrastructure, these are often deployed in corporate and professional environments.

Which option is the most secured, TKIP or CCMP?

While you view Wi-Fi networks on Acrylic Wi-Fi, you will find that many of them support both WPA and WPA2 security, and each one of these authentication mechanisms can support either TKIP or CCMP.

Although not recommended by the network standard, TKIP is used with WPA2 PSK for compatibility with older devices. In this case, you should disable WPA security on your Wi-Fi network, leaving WPA2 security enabled.
You should also disable TKIP, leaving only the CCMP options. Wi-Fi networks using only the WPA2-CCMP mechanism are the most secured. 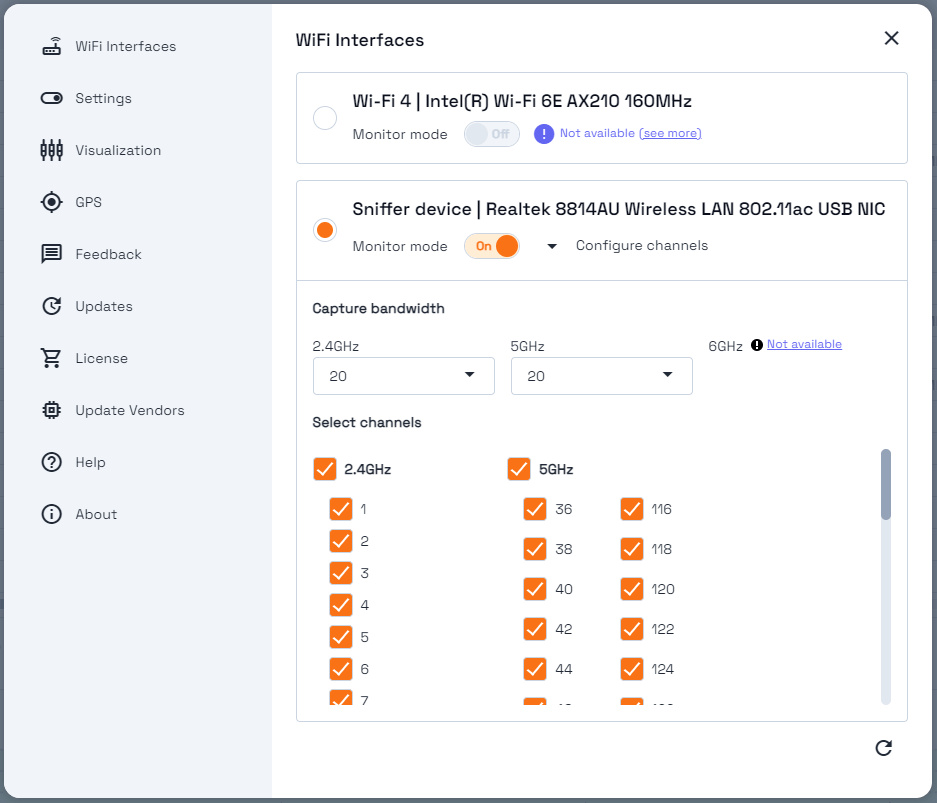 Wifi network client and IP address, how to discover them, without monitor mode