Edwin L. Heim Company is an American company with great presence in the electrical, mechanical and telecommunications industries. It has over 80 years of experience and offers its customers from simple repair jobs to complex turnkey solutions and everything in between.

A client with serious Wi-Fi network performance problems, despite having deployed a great number of APs in order to improve coverage, decided to hire Elheim to analyze and solve their Wi-Fi problems, as they were almost unable to use the Internet.

Elheim technicians performed a Wi-Fi site survey with Acrylic WiFi Heatmaps in the client’s facilities and, after that, proceeded to analyze the data captured, creating different heat maps. When they generated the coverage plot, they discovered there was something wrong: the APs coverage was depicted as isolated bubbles across the store but never overlapped amongst them. Something that seemed impossible at a first sight.

After analyzing carefully the data, Elheim technicians realized that this was due to a very strong co-channel interference: the 10 APs were broadcasting on the same frequency band, so every AP was awaiting its turn to “talk”, making really complicated to send even one packet, including beacon packets, used for advertise amongst client devices so these can get connected to the AP. 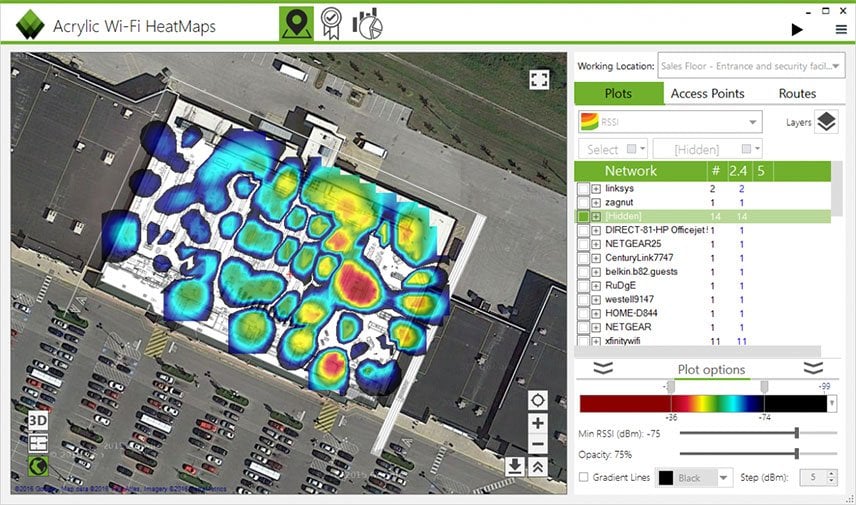 A poor Wi-Fi performance is very often a result of bad planning and not performing a site survey after deployment, in order to correct any potential miscalculation. Frequently, by lack of knowledge, some APs are added to the network aiming to improve the Wi-Fi coverage, as in this case; but as seen above, coverage issues are far more than a lack of APs.

Site survey to figure out the problem